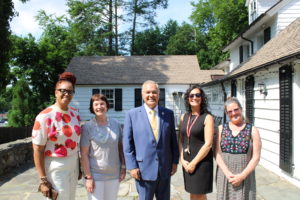 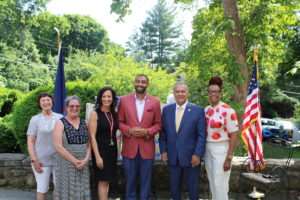 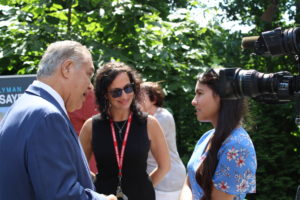 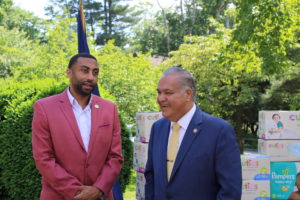 The efforts will help struggling families in New York who are facing increasing costs once the governor signs it into law.

A press conference about the impact this will have on local families was held at 3 p.m. on Wednesday, June 15 th at Wayside Cottage at 1039 Post Rd. in Scarsdale. Assemblyman Nader Sayegh and State Sen. Jamaal Bailey were in attendance along with members of the JLCW Westchester County Diaper Bank.

JUNE 14, 2022 (SCARSDALE, N.Y.): New York State is poised to help families by removing local sales taxes charged on diapers thanks to the efforts of the Junior League of Central Westchester. The League, which runs the Westchester County Diaper Bank, successfully lobbied lawmakers this Spring on the importance of removing the tax to help struggling parents already grappling with inflation.

The bill passed the state Assembly on May 31 st and the state Senate on June 4 th . The bills were sponsored by Assemblyman Nader Sayegh (D-Yonkers) and State Sen. Jamaal Bailey (D-Bronx.) The bill must still be signed into law by Gov. Kathy Hochul. A press conference on the achievement was held at 3 p.m. on Wednesday, June 15 th at Wayside Cottage, headquarters of the Junior League of Central Westchester. The cottage is located at 1039 Post Rd. in Scarsdale, NY. Assemblyman Nader Sayegh, State Sen. Jamaal Bailey and members of the Westchester County Diaper Bank and the National Diaper Bank were  in attendance.

While New York State does not charge taxes on diapers, many localities do. Diapers for one child cost about $1,000 a year, roughly $18 a week for about 50 diapers. Sales taxes can add an additional 4% to 5% to the cost, depending on the locality. This can be a hardship for struggling families, especially as diapers are not covered by government assistance.

“We at the Westchester County Diaper Bank receive countless emails and applications from families who are facing difficult situations. Imagine not being able to go to work because you cannot provide the diapers required for your daycare or not having a dry diaper available when your child needs one,” said Jamie Stinson, Co-Chair of the Westchester County Diaper Bank. “These are the hardships families in our communities face every day. Sales tax adds up, especially with the price of diapers skyrocketing. This
saved money can easily add up to an additional box of diapers over the course of a year, and to a struggling family, that is significant.”

About one in three women have reported cutting back on essentials like food, utilities or childcare to afford diapers for their children, according to a Huggies study. The poorest fifth of American families spends almost 14% of their paychecks on diapers, according to the Center for Economic Policy Research. Adding even a few dollars to the cost of a diapers package can result in parents missing work because they can’t afford enough diapers to send their children to childcare.

In Westchester County, more than 8,000 children up to the age of 4 live in poverty. To put that into perspective, it would take about 20.8 million diapers a year to provide enough for each family living below the poverty line in the county. The League collaborated with the National Diaper Bank as well as state diaper banks to create an email campaign at the beginning of the year to gain support from lawmakers.  The groups also met on April 26 th in Albany to lobby elected officials.
The Westchester County Diaper Bank, founded in 2014 as an initiative of the League, is on track to donate more than 125,000 diapers to families in need throughout the county this fiscal year. Diapers are generally distributed each month at the Westchester County Department of Social Services’ locations in White Plains, Yonkers, Mount Vernon, New Rochelle, and Peekskill. Diapers are also distributed to community organizations in the county.

“Through the Westchester County Diaper Bank, the Junior League of Central Westchester has leveraged our resources to yield sustainable impact for people by combatting diaper deprivation for babies, easing the financial burden for families, and increasing access to a basic need,” said League President Michelle Memoli.

Donate To Our Annual Appeal

DONATE TODAY
toward the JLCW Annual Appeal goal of $25,000 and support our life changing programs and community projects.

By continuing to use the site, you agree to the use of cookies. more information